MONKS MEADERY: OUR HISTORY, OUR STORY

Like many recent grads, Martin Key and Justin Schoendorf found themselves relatively poor and possessing an insatiable appetite for craft beer.

At the time, the selection in Georgia was quite limited; Georgia did not allow beer above 6% ABV until 2004. They thought making their own beer was the answer to their dilemma and the two enthusiastically dove into home brewing beer. 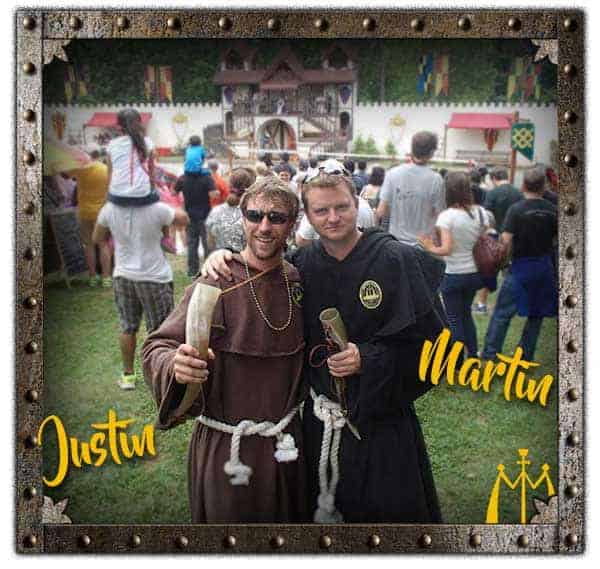 As Martin and Justin learned to make new and interesting beers, they tinkered with various styles and recipes creating things that were not yet available in the market. Eventually, they stumbled upon an alcoholic drink made with fermented honey. Nicknamed “the nectar of the gods”, they were drawn to this ancient and relatively obscure beverage. Never having tried commercial mead before, they went about making mead the same way they made beer: carbonated with very little sweetness. Initial attempts turned out well and were upwards of 15% ABV. The ABV alone got their attention and it quickly became a product that they kept in their brewing rotation.

Friends that enjoyed their brews gravitated more and more towards the mead and would often check in to sample the newest iterations. Friends would “randomly” stop by when a batch was near completion just to get it while it was fresh.

For the next few years, they would make many different versions of mead. Finally, they got curious and decided to try some of the commercial meads on the market. They soon realized that none of what was available tasted anything like what they were doing. They developed a recipe suited to their tastes, their friends seemed to like it, so they decided to start a meadery and share their recipe with the world. And that is how Monk’s Meadery began!

What's the story behind the name "Monks Mead"?

Justin and Martin chose on Monks Meadery because of the historical significance of monasteries related to mead production (and the loss of the popularity of mead in England).

Monks were the main keepers of bees; to harvest the wax used in religious ceremonies. Since there was not a large demand for honey, they would make mead to earn extra income for their monastery. During the English Reformation, Henry the VIII dissolved all the monasteries and destroyed most of the hives – as the honey disappeared, so did the mead.

Both Justin and Martin have been avid home brewers since the turn of the century. Justin has been in the alcohol business for more than 17 years, so he provides a lot of industry knowledge and experience.

Outside of that, they’ve had a lot of on-the-job training and they both have a passion for what they make – that drive keeps them invested in the growth and success of Monks.