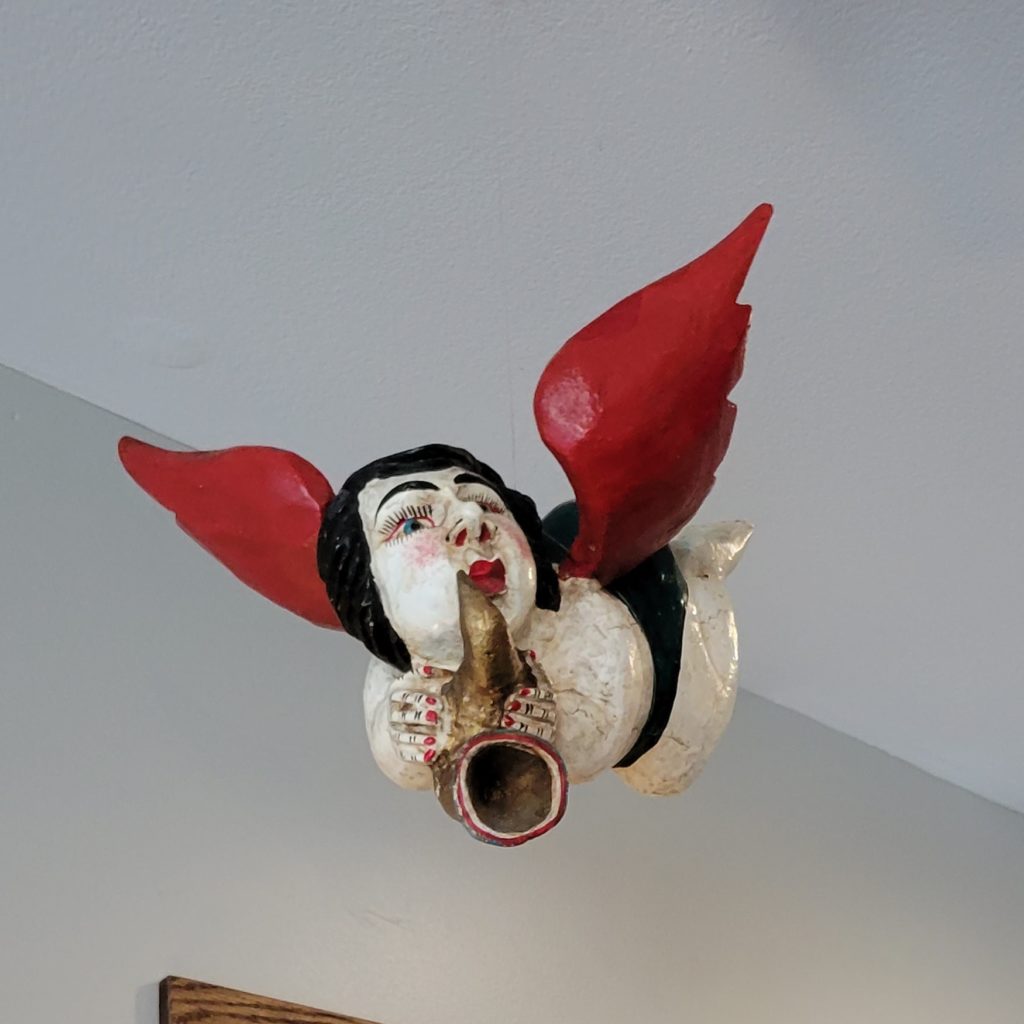 Neither a Cherub nor a Cupid – Art at the Meadery

When visiting the Meadery you will find what we today call cherubs or cupids hanging above our bar. The owner found these at an antique market in Mexico and thought they would perfectly fit into our Renaissance decor. And they do, considering that cupids represent love, were revived in the artwork of the Renaissance period, and mead was responsible for coining the term honeymoon. However, despite the interchangeable modern usage of cherub and cupid, these plump, winged babies hanging from our ceiling are actually neither.

What is a Cherub?

Let’s dig in. A cherub is a celestial winged being from religious descriptions. Why we call these adorably represented boys with full faces and wings cherubs should be questioned because cherubs are sort of scary. A cherub is described as a supernatural being with 4 faces, one of a human, one of a lion, one of an ox, and one of an eagle. A cherub also has straight legs with hooves instead of feet, and two sets of wings. Despite its creepy depiction, a cherub is an angel.  But what we imagine an angel to look like today is very different from what they were described as in religious writings. Angels were servants of god and there were usually several of them falling into angelic hierarchies with their roles depending on their ranks. These differed in different cultures. In Greek and Eastern Orthodox depictions of this hierarchy, a cherub is among the three closest angels to god, falling between the equally creepy seraphims and thrones. Seraphims were 6 winged creatures and thrones were 2 interlocked wheels with lots of eyes. In Jewish hierarchy, a cherub is one of the closest angels to humans just above ishim, which is depicted as a manlike creature that speaks to and appears to prophets in visions.

Cupid is a powerful god in Roman mythology who was adopted from its almost identical Greek counterpart Eros. Cupid is the son of Venus, the Roman goddess of love, and Mars, the Roman god of war, and himself is the god of love and desire. Similarly, Eros is the Greek god of love and one of many children of Aphrodite, the Greek goddess of love, and Ares, the Greek god of war.  While later depictions describe Eros as a son of two gods, in early Greek mythology Eros was said to exist in the 1st generation of gods. Cupid and Eros were both depicted in art as young males with wings. Their original depictions did not paint them as chubby boys with wings and bows and arrows. ‘Eros’  (The Louvre via Wikimedia Commons, My Modern Net )

During the Hellenistic period, art gave Cupid a youthful and chubby appearance as well as a bow and arrow to represent his powers. Then during the Renaissance period cupids in art became indistinguishable from putti, an Italian word for art figures depicted as chubby male children who were usually naked and sometimes had wings. Putti representing cupids became known as an amorini. Finally, it was the art of the 17th century that started representing putti and amorini as playful children disregarding the Roman god’s powers, which is where the modern Valentine’s Day representation of a mischievous flying toddler with a bow and arrow comes from. Let’s recap. A Cherub is a creepy celestial being with the head of a human, a lion, an ox, and an eagle. Cupid is a powerful Roman god of erotic love and desire with his Greek counterpart being Eros, both of whom are represented as slender young men with wings. Putti are art figures represented as chubby male boys, usually naked and with wings. And amorini are putti representing cupids. In our case at Monks, these guys are technically considered putti, but since mead is considered an aphrodisiac and these guys hang above our bar like a mistletoe, we can call them amorini.

The evolution of what we now know as cupid through art is understandable, but the history of how we interchangeably use cupid and cherub today is unclear, with the only obvious connection between the two being their possession of wings. 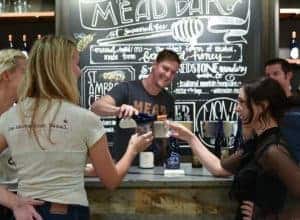 Mead is often confused to be a subcategory of wine and often referred to as “honey wine.” But mead’s biggest differentiator from wine is its 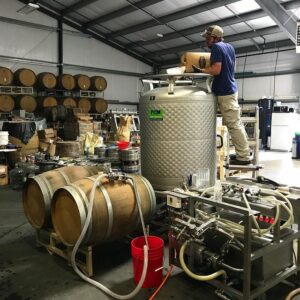 Mead is an emerging alcoholic beverage made out of fermented honey that is quickly making itself known in the market. Indian Pale Ale (IPA) is